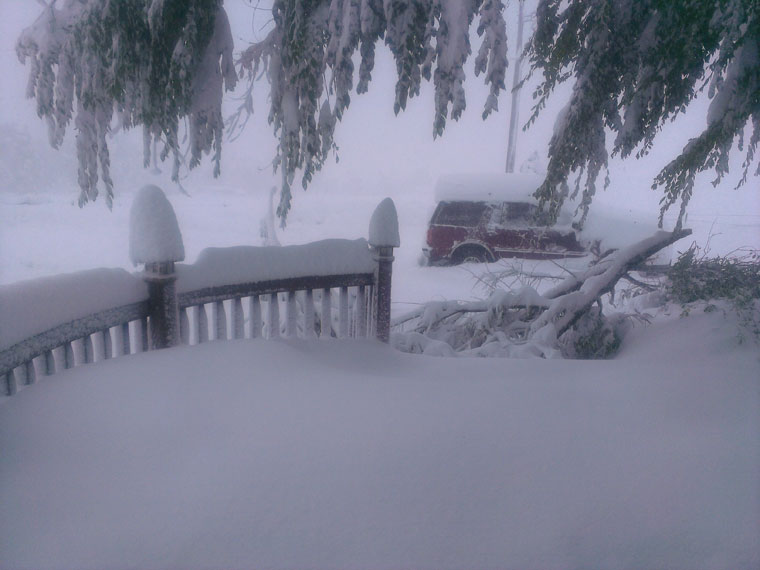 Early last week I told my wife that it was not going to be a very productive week. Little did I know how right I was.

I began the week working on a site redesign, but ending up pounding my head against the design wall for a while. Tuesday I had an on-site meeting with a client for some WordPress training and site tweaks. The meeting went well, but it involved nearly two hours of drive time.

Wednesday morning my dad and I left Spearfish and drove all day to Minneapolis, MN to attend his mom’s funeral on Thursday in Mora, MN. We left for Spearfish right after the funeral, at around 3:00 pm SD time, knowing that we were heading for a blizzard here in the Black Hills.

After a long night of driving we pulled into town after 4:00 am, having already driven through snow for an hour or two. There was five inches of snow on the ground at that point, and since the trees still had all their leaves they were already breaking from the heavy snow, with much more to come.

I debated staying up and getting to work that morning, but I opted for a few hours sleep instead. Three hours later I was up and the snow was still coming down. About an hour later our power went out and stayed off for the next two and a half days, coming on again late Sunday afternoon.

Those were trying days: no lights, no furnace, no computer, no fridge, etc. After the snow stopped on Saturday and the tree branches had stopped breaking, we started shoveling. And we shoveled for a couple days, trying to stay warm, figuring out ways to prepare food without power, and hibernating through the cold nights.

I’ve posted some more photos on my personal blog for those who might be interested in what three to four feet of snow in early October looks like.

As Monday gets under way, I’m trying to balance office time with cleaning up the remaining snow and downed tree branches. All things considered, I’m pretty sure this week will be more productive than the last one!